Published 6 years ago | Tagged ideas
Some of you may already have heard of 'The Transporters' as it has been around for while, however I think it deserves a mention as it is so good!

Transporters is a series of stories about the adventures of a group of vehicles.  The vehicles are animated, but have real human faces.  During each story, the child learns about a different emotion and then there is a quiz at the end to see what they have learnt.  If you would like to view an episode go the website:

The vehicles have a similar appeal as Thomas the Tank Engine.

The series was developed by Cambridge University, UK and is supported by research.  I used this program at an autism unit I used to work at.  All of the children who used this program saw significant improvements in their understanding of emotions.  They enjoyed the programs so much that they did not realise that they were learning. 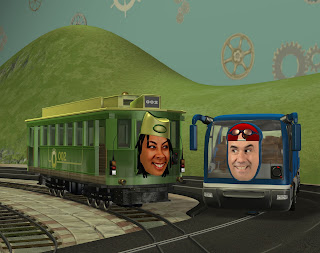 I prefer this program to the University's earlier emotions program 'Mind Reading'.  I have to admit I found some of the emotions difficult to interpret even though I don't have a difficulty understanding emotions.
comments powered by Disqus